Black Madonna on the Pillar, Chartres 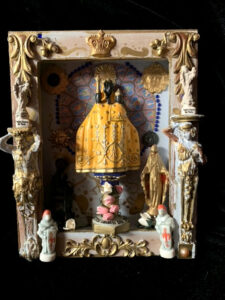 These altars are the original art created for the Mysteries of the Black Madonna tarot deck.  I created my first altar in 2010 after a pilgrimage to Lourdes and since then I have researched this sacred art form.  You can read more about the ancient practise of altar making in the wonderful book Imaging Pilgrimage – Art as Embodied Experience –  by Dr Kate Barush.  The second chapter in the book focuses on this spiritual and devotive process of mine, called Lourdes : Souvenirs as sites.  You can also read more about sacred artmaking on my blog

and on Patreon : www.patreon.com/walkingwithmary.  Each altar is unique; set in a wooden three dimensional box, and can be hung (if you attach a small hanger) or stand against something.  The dimensions are 17 cm x 14 cm.  Each altar is signed by myself, has the corresponding tarot card on the back and comes with a card wax sealed.  I ship in carefully foam lined boxes with DHL International Courier Express worldwide – delivery within a week – and this is included in the price.

The figurine in this altar I bought at Notre Dame de Chartres in 2013 when the Madonna was still black.  She has since been whitewashed.  Read the full description below 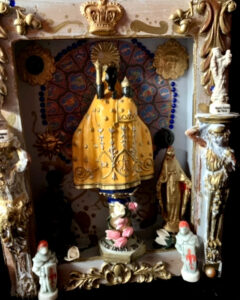 Radiant Black Hag of the Underworld, She who is continually birthing our world

In this maternal womb that is the crypt of Our Lady Underground all things are possible.

All colours are present in the colour black and all colours are included in black. No other colours are visible as they are not reflected. Black absorbs all colours. Seven colours exist in both darkness and in light. With the presence of light, the colours reinforce each whereas in darkness they extinguish each other. One can say that the colour black is pregnant with light.  Colours come forth and become visible where light and darkness co-operate and work together and where light and darkness meet. Colour are created from the sacred marriage of the opposites of duality of light and dark. New life can only be witnessed and manifested when an object is present.

When one contemplates on the colour black, a vast silence and quiet descends in the mind as all thought ceases. Peace settles. Black is the colour of the vast silence and deep peace. Pregnancy and the healthy growth of the unborn child takes place in the dark womb.  Dark winters give life to the colours of spring.

The Chartres Cathedral , is believed to have been an ancient Druid site of worship to the Great Mother for centuries.  The Notre Dame de Chartres with her magnificent labyrinth, blue Virgin and three Black Madonnas, have been the seat of Our Lady since early Christianity.  The beautiful and awesome 11-coil labyrinth on the floor of the Cathedral, right underneath the rose window, is in itself a mother goddess symbol..

The black virgin, Virgo Puritura, She who is pregnant and on the verge or threshold of giving birth. The Black Virgin who is pregnant with the Child of Light and She Who is continually birthing our world. The Black Virgin of Chartres was worshipped as a Virgo Puritura. It is said that the Druids created her statue as they had long foreseen the mystery of the Incarnation.

The Black Pregnant Virgin from Dijon, France is also known as Our Lady of Good Hope and she is also a Virgo Puritura. She is made of oak and one of the oldest Roman statues.

She is clearly pregnant yet still called Virgin. The Vierges Noires, the virgin or Latin virgo, does not refer to the sexual state of the woman, but to the virgin nature of the pure potentiality of chaos, the materia prima. The original innocence of pure potential of the cosmic void and its unstructured chaos, still has to be inseminated or fertilised : the Black Mother of the Cosmos is virginal and black.

On the Day of the Annunciation, a statue of the Black Madonna is carried through the streets of Chartres  before being placed in front of the statue of the Assumption of Mary, where she is kept for one week and then hidden away till the following year.

Parading the Black Madonna in this way recalls the way the Druids in ancient times brought her out of the grotto underneath the granite promontory upon which the cathedral today stands. They honored Mother Earth and the cycles of the seasons through the Black Madonna.

Chartres Cathedral is sacred to the Virgin and long before her to the older Druidic Goddess. Chartres is an example of perfect harmony created by sacred geometry. The two towers of Chartres represent the sun and moon and also the solar and lunar, male and female principles of both Alchemy and Kabbalah. Their union is reflected in the central column of the nave with the altar at the place of the human heart in the body.

The Cathedral of Chartres was built in what was once the sacred oak grove of the Carnutes, an ancient Celtic tribe of the Iron Age. This was a sacred place for the Carnutes who gathered once a year for ceremony. They worshipped the goddess in the form of Virgo Paritura in a grotto next to a sacred well. This aspect of the Goddess was a virgin giving birth to a child. The Carnute’s grotto had a rock that was in the shape of the Mother Goddess vulva. The crypt was built over the grotto The sacred well is now called The Well of Saint Forts. Notre Dame Sous Terre, Our Lady of the Underground (see the Mysteries of Mary tarot deck) is now the Virgin of the Chartres Crypt.

The most disturbing change I discovered was the “restoration” of the 15th century Virgin on the Pillar. A previous Black Madonna, a sacred icon of adoration and dark mystery, is now painted in a “doll-like” fashion.  The Black Madonna is lost and hidden from view by the perfection of a freshly painted Mary and her child draped in new clothing.  Why?

From what I was able to discern from my inquiry during my time at Chartres this is what I learned. Apparently in the 19th century the original dark walnut carved statue (the Black Madonna) was painted in the fashion of the day. Soon afterwards it was painted over to darken it in entirety once again. Recently, those in charge of restoration for the cathedral made the decision to “restore” the Black Madonna to her 19th century painted style. For now, the Black Madonna has disappeared under layers of paint.  Some find her beautiful. Perhaps by today’s standards of botoxed, sanitized, face-lifted, nipped and tucked unattainable perfectionistic stylized and idealized feminine beauty she is. However, as in most areas of life today…her mystery and true original nature has been obscured and hidden from view. When meditating upon her there is no longer a need to question. Everything is obvious. There is nothing to draw one in. No thing remains for the sacred imagination to grasp hold of.”

This altar contains a miniature of the original Black Madonna on the Pillar.

May we keep Her Mysteries alive

In the maternal womb that is the crypt of Our Lady Underground all things are possible.  She is pregnant with life and continually birthing the new.  She is the Holy Pregnant One, the One birthing and the Holy Midwife to your inner cycles of resistance, surrender and acceptance.  She accompanies you as you travel down the dark and unknown birth canal of the death of an aspect of the personality or through the passage of a psychic death.  She awaits you as you are birthed anew.