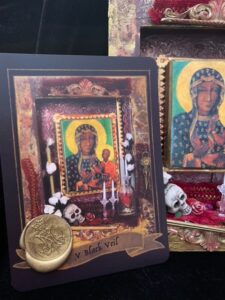 These altars are the original art created for the Mysteries of the Black Madonna tarot deck.  I created my first altar in 2010 after a pilgrimage to Lourdes and since then I have researched this sacred art form.  You can read more about the ancient practise of altar making in the wonderful book Imaging Pilgrimage – Art as Embodied Experience –  by Dr Kate Barush.  The second chapter in the book focuses on this spiritual and devotive process of mine, called Lourdes : Souvenirs as sites.  You can also read more about sacred artmaking on my blog http://bookofmarysacredheart.blogspot.com and on Patreon : www.patreon.com/templeofmary.  Each altar is unique; set in a wooden three dimensional box, and can be hung (if you attach a small hanger) or stand against something.  The dimensions are 17 cm x 14 cm.  Each altar is signed by myself, has the corresponding tarot card on the back and comes with a card wax sealed.  I ship in carefully foam lined boxes with DHL International Courier Express worldwide – delivery within a week – and this is included in the price.  This altar will be shipped first week in January 2022 as I am taking a short break 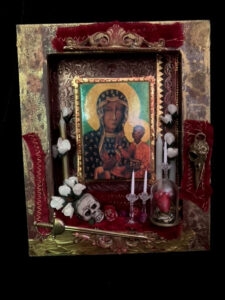 The Earth is regarded as the bod of the goddess, constantly creating new life from itself. Mary, as Mother Earth, is also connected to the relationship of one’s own mother, one’s family and the motherland.  In Polish culture she is called Matka Polska, indicating that she is both Mother Pole and Mother Poland.  In Mary’s name and under Her protection numerous battles for independence from foreign and internal oppression took place.  Mary, Our Lady Czestochowa gradually developed into a Polish master symbol that unified widely diverging interests and linked different groups together.  She represent motherhood and devotion, but She also became a core symbol of the Polish resistance during its complicated history.

She is associated with the synchretic modern representation of Ezili Dantor or Erzulie Danto, the main loa or senior spirit of the Petro family in Haitian Vodou.

The Great Mother of Czestochowa reunite all that has been torn asunder.  She will dissolve and transform all abuse of power and cruelty and any ill-will directed at Her children.  She brings compassion and vital energy to your every battle with opposing circumstances or inner opponent and She will transform defeat into confidence and new life