All Mysteries of Mary tarot deck pre-orders have been shipped.  If you have bought the deck here on pre-order, sign in to your account page at the bottom of the screen and you will find updates and the shipping tracking number added to your order.  I no longer ship by airmail as international borders open and close all the time and parcels get stuck in the system.  I only ship by DHL Courier Express which takes approximately four days.  The shipping price on the website is the price for DHL Express Courier.  Please add your telephone number to the order form.  I drop parcels off with DHL on a Friday and your deck should arrive by the following Tuesday.  You will receive a confirmation email with all details directly from DHL.

These decks listed here are in stock and what was left over after the pre-orders were shipped.  There is only a limited number of decks available. 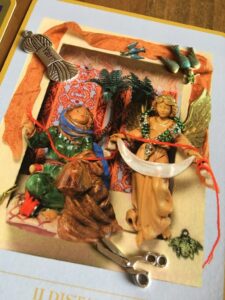 The Mysteries of Mary tarot deck cards are bigger than average on excellent cardstock with a matt finish. They are durable and double as altar cards. The deck is presented in a hand sewn tarot pouch (cream calico and vintage holy card image) with a 160 page guide book and an extra numbered and signed tarot card – a small vintage bakelight Mary statue and a plastic rosary.

Decks are sent by DHL Express Courier only.  I ship on Fridays and delivery takes place in approximately four days. Please add your telephone number to the order form.

Follow me on Instagram @walkingwithmary and @bhaktymayi_ma and walk with Mary and her tribe by following the hashtag #walkingwithmary.

The French Madonna and The Temple of Mary is also on Patreon. Have a look and consider supporting my on-going work with the Black Madonna tarot deck and become part of the Temple or community.
www.patreon.com/shop/thefrenchmadonna

I am very proud to share that the deck has been included in the Museo dei Tarocchi (International tarot museum and the only one of its kind in the world) in Riola, Bologna Italy!! I visited the museum and its owner a few months ago and you can read more about this on my website here :

– small statue of Blessed Mary for your altar

There are no reviews yet.