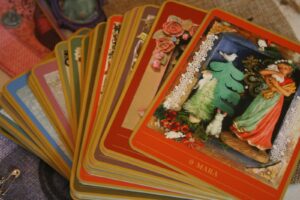 Please note this is a pre-order as I am awaiting Mysteries of Mary tarot decks.  Delivery will take place from May 2021 while stocks last

The price listed here includes courier delivery by hand.  Please note due to the extremely slow and erratic international shipping due to Covid I at the moment only use DHL Express Courier.  I ship from South Africa worldwide and  delivery takes place in approximately four  to five days. Please add your telephone number to the order form.

Please include your phone number to prevent delays.  You will receive text updates from DHL. I prefer not to ship by airmail for now due to the Covid19 pandemic and international borders open and close all the time and parcels get stuck in the system.

The handmade pouches are unique and they may not look the same as the one in the pictures.  I 3D print the Virgin Mary statues and paint them by hand and these are also unique.  This is all part of the indie nature of this one of a kind deck.

The price listed here includes courier delivery by hand.  I have lowered the price of the deck set for the duration of  the Covid19 pandemic as I am not prepared to ship by postal airmail which is very unreliable and extremely slow and delayed by months.  Please include your phone number to prevent delays.  You will receive text updates from DHL.

The handmade pouches are unique and they may not look the same as the one in the pictures.  I 3D print the Virgin Mary statues and paint them by hand and these are also unique.  This is all part of the indie nature of this one of a kind deck. 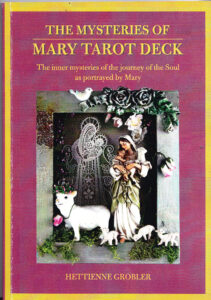 The Mysteries of Mary tarot deck cards are bigger than average on excellent cardstock with a matt finish. They are durable and double as altar cards. The deck is presented in a hand sewn tarot pouch in gold fabric (please note that the original cream calico and vintage holy card image pouches are not available at the moment as the product that I used to fix the images with are not being imported right now) with a 160 page guide book and an extra numbered and signed tarot card – a small Mary statue and a holy card.

Decks are sent by DHL Express Courier only.   Please add your telephone number to the order form.  This is a pre-order and shipping will start in May 2021

Follow me on Instagram @walkingwithmary and @bhaktymayi_ma and walk with Mary and her tribe by following the hashtag #walkingwithmary.

The French Madonna and The Temple of Mary is also on Patreon. Have a look and consider supporting my on-going work with the Black Madonna tarot deck and become part of the Temple or community.
www.patreon.com/shop/thefrenchmadonna

I am very proud to share that the deck has been included in the Museo dei Tarocchi (International tarot museum and the only one of its kind in the world) in Riola, Bologna Italy!! I visited the museum and its owner a few months ago and you can read more about this on my website here :

There are no reviews yet.