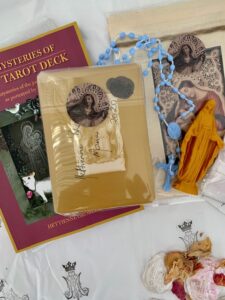 A pre-order of the Mysteries of Mary tarot deck shipped via registered airmail with the postal services.  This is much cheaper than the DHL option but you have to allow up to 4 months for delivery.  $40 international registered airmail shipping from South Africa world wide. Due to Covid19 shipping worldwide has been slowed down and tracking is erratic and I cannot trace your parcel.  On average parcels took three months to arrive but some have taken 6 months.  This is a pre-order as I am awaiting the Mysteries of Mary decks and shipping will start during May 2021.

A special listing for Mysteries of Mary tarot deck – without shipping costs (while stock lasts).  If you purchase this deck it will be shipped with your purchase of the Mysteries of the Black Madonna tarot deck May-July.  Shipping costs will be advised,  I am hoping that the international postal services would have improved enough by then to ship the decks via airmail and not by courier (which is obviously much more expensive). 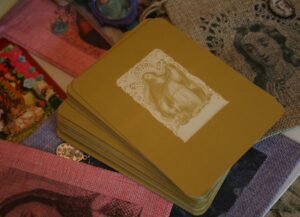 Mysteries of Mary tarot deck shipped via registered airmail with the postal services.  This is much cheaper than the DHL option but you have to allow up to 4 months for delivery.  Due to Covid19 shipping worldwide has been slowed down and tracking is erratic and I cannot trace your parcel.  On average parcels took three months to arrive but some have taken 6 months.  This is a pre-order as I am awaiting the Mysteries of Mary decks and shipping will start during May 2021.