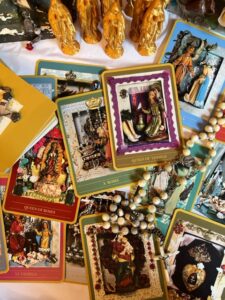 This is a pre-order for the Mysteries of Mary tarot deck included shipping and delivered by DHL Courier Express international.  Sets are shipped as printed matter to the US which means that no custom duties are payable  but contents have to be declared to EU under the new import regulations 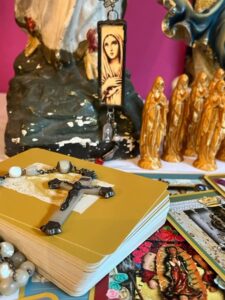 The Mysteries of Mary tarot deck is now available on pre-order.  Delivery will be during December 2022 .The yearly Christmas break in South Africa is from 15 December to 15 January and printing companies close for this period. If delivery of all books and decks do not arrive in time, I will only be able to ship in January 2023.

The price of international courier delivery is a minimum of $60 up to $80 depending on the country of delivery.  The price of the deck set is $120 – all included in the listed price.

I have no choice but to use a courier delivery service as the mail from Africa to the rest of the world, especially the US, do not arrive.  Combined shipping is not any cheaper as I pay per weight of the article.

THIS LISTING INCLUDES A REDUCED PRICE ON DHL COURIER SHIPPING, WITH INSURANCE AND DELIVERY BY COURIER WITHIN 7-10 DAYS.  I ship as ‘printed matter’ with DHL which is exempt from Custom duties except in the EU.  A new addition to the Custom duties act was accepted on 1 July 2021 that all items have to be specified and declared and will be taxed.

A card deck of 78 large size cards printed on 350 gsm card stock with an accompanying A5 paperback book and 160 pages of info on each card and its themes and background.

But to myself, and others like me, there is a connection, a red thread that connects the dots in the eye of the heart. The ancient divine feminine had been demonized many moons ago and her stories had gone underground. One has to rely on myth, folk tale, oral traditions, fairy tales and subtle clues and especially correspondences, to uncover Her story. And today Mary is the Sacred Keeper of all Our Lady’s titles and Wisdom.