Blessings to you on Day Six of Walking with Mary

We continue with the prayer, mantra and contemplation which
you are now familiar with. 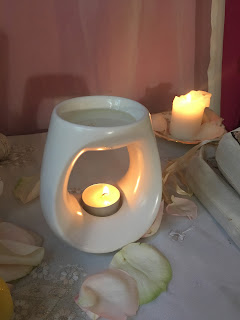 Today you can add an oil burner to your altar and
burn lemon oil.  I like to add water to my oil in the
burner and some people add salt.
Later on in the practise I will share with you a powerful
meditation blend of the other two oils listed previously.
You can continue to burn lemon oil every day.
It is also a good practise to burn lemon oil throughout your
house and even to add lemon oil to a water spray bottle,
add holy or blessed water as well, and spritz in the rooms.
A few years ago I became obsessed with both the smell and taste
of lemons.  I started with drinking lemon in my water, burning lemon oil,
wearing lemon oil and eventually I travelled to the south of Italy
to immerse myself in the culture and traditions related to the use of lemons.
Since then I have uncovered so much research on this sacred fruit! 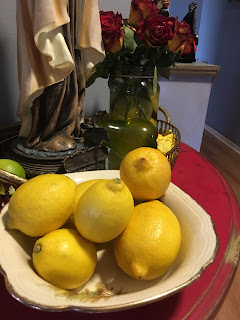 The lemon is a citrus which is a variegation of the Etrog, also known as
Citron and Citron Medica.  I am sharing the following from the website
that I share below.
The etrog originated in India. From there it found its way to Persia
(modern-day Iran), Aram-Naharayim (modern-day northern Syria),
Israel and Egypt. Archaeologists have discovered etrog seeds in
Iraq (ancient Babylon) dating back to 4000 BCE, and etrogs
were found in Egyptian tombs and wall murals dating to 1500 BCE.
We can learn about the antiquity of the etrog
from Jewish sources. According to one tradition, the “Tree of Knowledge” i
n the Garden of Eden was an etrog tree. One basis for this tradition is the
biblical description: “and the woman (Eve) saw that the tree was good for eating
and a pleasure to look upon” (Genesis 3:6).
In the Midrash, the Sages taught that one of the distinguishing features
of the earliest trees was that all of their parts were edible.
“Go and see which tree …can be eaten just as its fruit.
You will only find the etrog” (Breishit Rabba 15, 8). In the time
of the Mishna and the Talmud, it was customary to eat the sprouts
and the young leaves of the etrog tree. 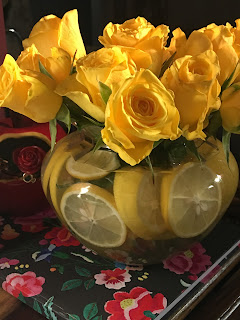 It is still customary in the Jewish tradition to gift others with
and etrog or citrus on the religious  feast day of Sukkot.
In Italian folklore and herbal craft and tradition, it is a practise
to plant a lemon tree at your front door for protection.
It is also still a practise in some areas to keep a branch
from a lemon tree in your kitchen, as well as a bowl of the fruit.
At many hotels and guesthouses you will still see a bowl of lemons
at the front door – for purification and protection!
At the feast of the Madonna in Tropea entire
bouquets were created from lemons and her statue
had lemon trees on either side.
In India you will see lemons perched on to the trident of Shiva
Day Six of the Art Novena to Our Lady of Lourdes 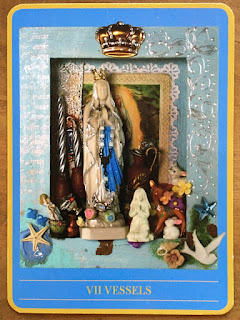 Water has always been the sacred energy of the feminine.

When one follows the leylines in the earth, the Mary line
curves and spirals around wells and you will find
cathedral and churches built on the power points of the Michael
lines (as they are known in the UK)
The feminine has always been worshipped at wells
and it is quite noticeable what an important role the well
plays in Judeo-Christianity and its stories and they
usually involve a woman..

From the very first days, miraculous cures have been granted at Lourdes to many who drank or bathed in the spring that Bernadette discovered at the Lady’s prompting. The Catholic Church is extremely slow and meticulous about acknowledging the validity of a cure and so most of the cures claimed there are never officially recognized. Even so, there are dozens of totally recognized cures that have happened at Lourdes that have been documented by the Church and the medical profession. The first healings happened almost immediately in 1858 and continue until the present day.

This healing is brought to us on many, many levels.

Water has the power to drown us or to quench our thirst.
We know Mary as the loving nurturing mother and also
as the Mater Dolorosa, the grieving mourning mother,
dressed in black, mourning the loss of her son.

In Lourdes you will see hundreds of pilgrims carrying large
containers of water from the sacred spring home every day.
We bring tiny bottles of the healing waters home with us.
Mary is called a Vessel of Spirit, a Vessel of Honour and here in
Lourdes she is the Vessel of the Sacred Waters.

In alchemy the vessel is the container in which the
various ingredients are mixed and transformed by each other.
It was believed that the alchemists were looking for
a way to turn lead into gold, but this is a metaphorical
journey of transforming darkness into light.  Or of
finding joy and peace amidst sorrow and hardship as we live
in a world of radical opposites and many challenges.
Mary is the vessel for the divine incarnated in herself as
the Immaculate Conception and in
giving birth to her Son
and then as all of us.
She is also the spiritual vessel in which
opposites combine.  As we are tested and challenged, like Bernadette,
we have the choice to obey the instructions of the voice of the Lady
that no-one else sees or to listen to the incredulous villagers and
Cure.  As we follow the calling of our heart, we are led to dig where
no-one else thought to look and we will uncover a spring that will
feed and nourish thousands.
Ave Maria
Hail Mary
Eviva Maria
Liked it? Take a second to support Hettienne Grobler on Patreon!