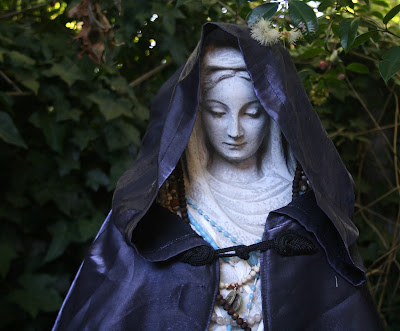 Welcome to Day Seven
Today is the final day of the first week.  By now you are familiar with the
daily ritual of the Immaculate Practise.
Today is dedicated to Mary’s blue cloak of protection.
Below is a special prayer and step by step instructions on how to receive the
special diksha.
Feel free to add it into your daily ritual in any way. 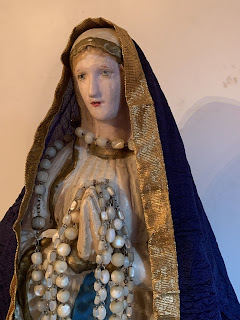 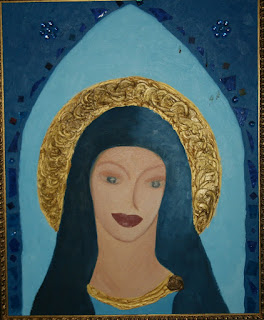 See her energetic Blue Cloak that surrounds her mystical form and aura.
Call on Her presence.
‘Oh Divine Mother, please come to me;
reveal thyself;
bless me with your Presence.
You may become aware of a colour, a sensation or a strong rush of emotion.
Allow, allow, allow. You may want to stay in the awareness of her Grace for a few moments before continuing.

Ask her to grace you with the Diksha of the Blue Cloak of Protection.
‘Oh Divine Mother, by the power of Love vested in you and in myself, I ask to receive your Blue Cloak of Protection. I am willing to open my heart and mind to receive this energy transmission and to allow it to act in my energy field;
for it to cover my entire aura and protect all my energy bodies.
Thank you thank you thank you.
Jai Maa! So Be It’

Allow yourself to receive the energy and see/sense/visualise the Blue Cloak encircling your body. It covers your entire body down to the toes. The hood slips over your head and the two front seams meet down the length of your body.
Spend time, experiencing the energy of the Blue Cloak and take it with you,
into your energy field.
Stay in this energy for 10 minutes until you feel the energies dissipate. You can repeat this meditation as often as you like. You can call on the Blue Cloak for Protection in times of anxiety or stress. The more often you meditate on the energy received during this Diksha, the stronger the energy will become.
thank you, Beloved Mother Mary, for this powerful and divine gift.
You are invited to share these meditations and gifts with others 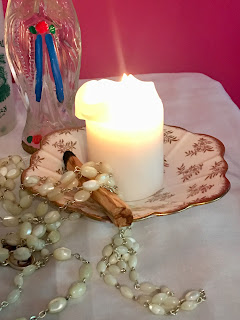 Today Bernadette and her story is famous and she is regaled for her vision, her faith,
her commitment and the wondrous gifts that she brought back to our world
from her meetings with Mary of Lourdes.

But this was not the case in her lifetime. She was the only one who saw the visions
of the Radiant Lady. No-one else believed her.
She was ridiculed and thought to be insane.
Her mother forbade her to go back to the grotto after being told about the visions.
But Bernadette persisted. and she obeyed the Radiant Lady and took her
messages back to the village and the local priest.
She was taken in for psychiatric evaluation; she was arrested by the police
and she was vilified by the villagers. 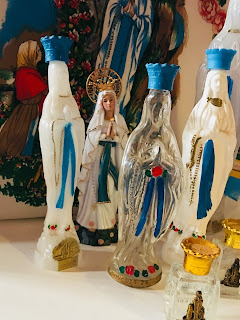 In many fairy tales and myths as well, the young heroine has to overcome certain tasks until
the ultimate challenge has been completed. The ultimate challenge for Bernadette was when
Magnificent Mary of Lourdes told her to dig for water in a bone dry patch of land where
there had never been water before. And Bernadette started to dig with her hands
and nothing appeared.  The villagers shook their heads at her and walked away.
But she persisted and kept on digging away with her hands in the dirt.

‘On Feb. 25 Bernadette began by praying, then she pushed aside the branches of the wild rose bush and went to kiss the ground under the rock again. She came down the slope and fell into ecstasy. She got up as if confused and started for the Gave. She stopped abruptly, looked behind her, as if hearing instructions from the rock, and made a sign of assent. This time she walked towards the grotto, not toward the Gave. She went a little way and looked around, confused. She raised her head as if to question the Lady; then she resolutely bent down and began to scratch at the earth. The little hollow she scratched out immediately filled with water. She waited a moment, then drank of it and washed her face with it. She took a blade of grass growing in the soil and put it into her mouth. When she returned to her place of prayer, her face was smeared with muddy water and a cry went up from the crowd: “Bernadette has lost her mind!”
Most of the crowd began to leave, disillusioned and sure the ecstasies were nothing but hallucinations. She herself remained in prayer almost another hour, serene and radiant as usual. Those who remained with her and who accompanied her afterward testified that she was as ordinary as ever and fully in control of her faculties. They asked her to explain her behavior. She said, “While I was in prayer, the Lady said to me in a friendly but serious voice, ‘Go, drink and wash in the fountain.’ As I did not know where this fountain was, and as I did not think the matter was important, I went towards the Gave. The Lady called me back and signed to me with her finger to go under the grotto to the left; I obeyed, but I did not see any water. Not knowing where to get it from, I scratched the earth and the water came. I let it get a little clear of the mud; then I drank and washed.” 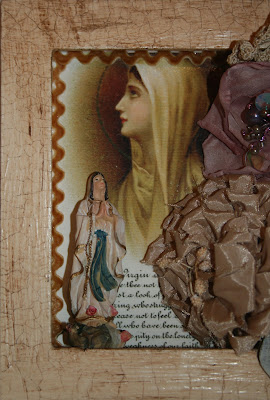 As in fairy tales Bernadette surrendered her
fear, her free will and herself to the visions
and the presence of the supernatural.
As the innocent heroine of the story
she acted in hope and belief in the
impossible.
The appearance of the Lady in White at Lourdes
and the miracles that she brought to the world, has the ability to
transform your world.
Novena for day seven
Magnificent Mary may I remain open
to the impossible
May I remember not to ignore the very subtle
messages of Spirit;
and may I undertake each task as the sacred task that it is
Ave Maria
Liked it? Take a second to support Hettienne Grobler on Patreon!