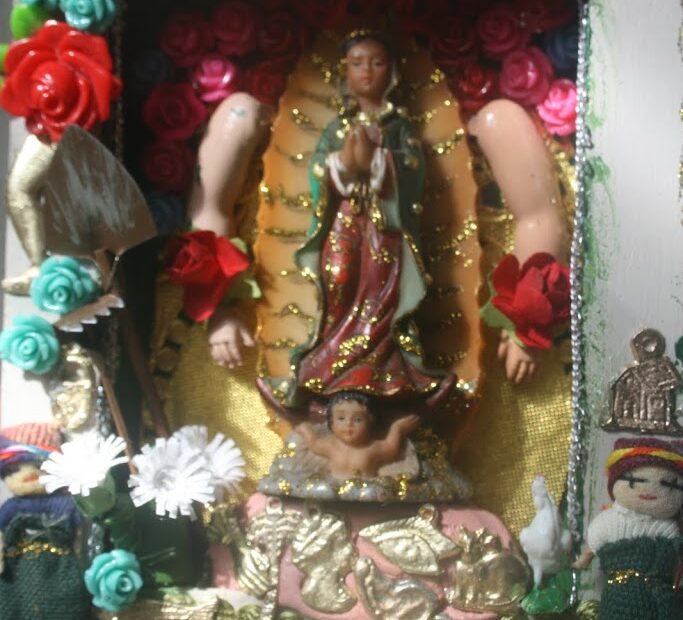 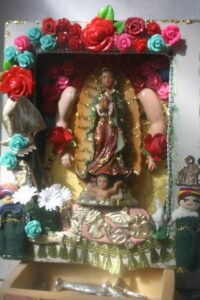 When we read that the Radiant Lady at Lourdes stands over the wild rose bush
and that she has golden roses on her bare feet, we realise that she is deeply identified with roses, as was Our Lady of Guadalupe. The rose just seems to be the most easily recognizable symbol for the flowering of differentiated consciousness or the unique divine spark.
The Lady of Guadalupe brought forth roses in cold December and wrapped them tenderly in an ordinary tilma worn by an old Indian peasant. This is an image of wrapping consciousness in the outer cover of our human body, something that a mother does when she conceives a human life. It is something that the earth does when she provides us with the material for a human body. Or, another way to look at it, is that creation itself – the material world – is a wonderful cloak that covers the radiant divinity.
Juan Diego had something in common with the Lady who came to him on the hill of Tepeyac. They each had a cloak that was made of the fabric of created reality. She gave him a visual aid in order to teach him and us about this. She imprinted her picture graphically so that Her cloak – the entire cosmos – can now be seen upon his rough one.  This Lady is not interested in dogma or ideologies; she interfaces with us to teach us about our personal rose – our inner divinity – which is trying to become incarnate here. 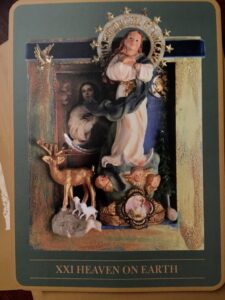 The woman at Lourdes refuses to give any other name but to say “I am the Immaculate Conception.” She does not say, as the Church would have Jesus’ mother say, “I am the virgin Mary who has been immaculate from the moment of my conception.” (conceived and born without sin of any kind) She says that she IS the Immaculate Conception. The Lady of the Grotto is the embodiment of the cosmos speaking to us as an aspect of God’s own Being. She shows us the breathlessly beautiful immaculate plan – God’s conception of materiality. She is telling us that she is an image of our created, material nature, which is nothing less than a cloak that covers divinity. She uses every means available to communicate to us about who we are and what will help us.
At Guadalupe she used symbolism that the Aztecs would understand. It spoke instinctively to the Spaniards, as well. She uses symbols and language that will help her immediate hearers to understand for their own purposes. As the late mythographer Joseph Campbell has pointed out, different religious traditions are like software that helps the “computer” to function. It is usually best for people to stay within their tradition, if it is helping them to function. So this woman relates within those belief systems, but is not at all confined to them.

The Pre-Christian Apparition of Queen Isis

In conjunction with Lourdes, it is necessary to speak more about Queen Isis whose lore is still embedded in the Christian mythology from its ancient roots in Judaism while it lingered in Egypt. The Lady of the Lourdes grotto asked specifically for processions. Queen Isis loved grottoes and processions. Processions to the goddess are as old as recorded history. What child of the pre-Vatican Catholic Church does not recall the May processions and the joy of strewing flowers in the path of the statue that represented Mary? It was a way of showing our deep devotion to our “Queen of Heaven.” She was “Queen of the angels and Queen of the May!” Bernadette referred at times to the Lady as  “The Queen of Heaven” or “The Beautiful Lady.”

We have an account, still extant, of an apparition granted by Queen Isis in ancient times that further points to the identity of the marvelous woman still appearing today. It comes from the book “The Golden Ass” written by Apuleius, an initiate of Isis, the night before he walked in her procession in 150 A.D. Here is his testimony that records the words spoken by the apparition that stood before him then:

“I am she that is the natural mother of all things, mistress and governess of all the elements, the initial progeny of worlds, chief of the powers divine, queen of all that are in hell, the principal of all that dwell in heaven, manifested alone and under one form of all the gods and goddesses. At my will the planets of the sky, the wholesome winds of the seas, and the lamentable silences of hell are disposed; my name, my divinity is adored throughout the world, in divers manners, in variable customs, and by many names.

For the Phrygians that are the first of all men call me the Mother of the gods of Pessinus; the Athenians, which are sprung from their own soil, Cecropian Minerva; the Cyprians, which are girt about by the sea, Paphian Venus; the Cretans, which bear arrows, Dictynian Diana; the Sicilians, which speak three tongues, infernal Proserpine; the Eleusinians, their ancient goddess Ceres; some Juno, others Belonna, others Hecate, others Ramnusie, and principally both sort of the Ethiopians, which dwell in the Orient and are enlightened by the morning rays of the sun; and the Egyptians, which are excellent in all kind of ancient doctrine, and by their proper ceremonies accustomed to worship me, do call me by my true name, Queen Isis.” (Occidental Mythology, p. 42-43 – from The Masks of God series).

When she appeared to Apuleius she was crowned with the headdress of the moon and two vipers, with corn stalks woven in her hair. Her multi-colored robe was woven with flowers and fruit, and her black mantle embroidered with stars and the moon. There is much similarity between the vision of Apuleius and that of Juan Diego, the visionary of Our Lady of Guadalupe. The mantle of Isis is covered on the outside by the night sky – by stars. Like Our Lady of Guadalupe, she is dressed in the cosmos itself as if it is her robe.

Spirit “wears” materiality like a garment.
This garment is Earth’s physical nature –  her Body.
She/we are the Immaculate Conception!

I enter the Underworld as you pull me into your embrace,
in every waking moment of living.
Contemplating on your Presence in the world,
opens me up to the poignant beauty and suffering
of all life in order and my  heart breaks open
over and over, over flowing with compassion.
As my rigid mind dissolves in your
presence, all boundaries between myself and all living creatures
and the earth disappears and we are all one.
Ave Maria
Om Jai mata Mary Ma
jai jai ma
blessings
Hettienne
Liked it? Take a second to support Hettienne Grobler on Patreon!