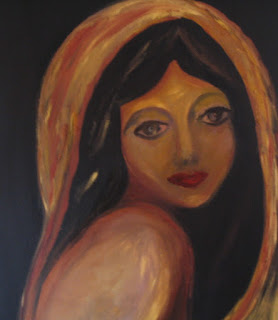 In the Book of Mary, the two becomes One. East meets West; masculine joins with feminine; duality recedes and unity is revealed. Boundaries between religions and philosophies disappear; boundaries between self and others dissolve and ultimately self is known as Self.

Light/Jyothi is Grace. Grace is not limited to a belief system, tradition, religion or spiritual path. The Sun shines on everyone and everything with equal disregard for belief in separation.

The Christ is not limited to a belief system, tradition, religion or spiritual path. The Christ is the Divine Blueprint of Perfection and the Sacred Heart of Divinity. The Christ is an emanation of the Ray of Compassion.

Kundalini is known by many names : Grace, Light, Jothy, Holy Spirit, Shekinah, Sophia, Kali and Mary. She is the Shakty, goddess within that illuminates the path to sacred union. 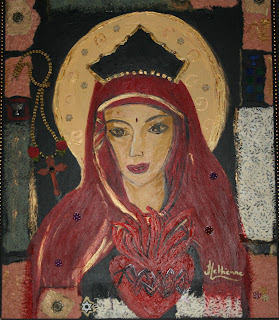 She is the Divine Mother, the One who Initiates.  She is the birthing and containing mother who gives us safety and She is also the ego-devouring mother who transforms us.
The Great Mother remains true to her essential, eternal and mysterious darkness, in which she is the center of the mystery of existence – Erich Neumann.
Mary nourishes and comforts us as does ‘the valiant woman’ in the Book of Provers.  We find this in Mary in the images of her in motherly poses.  The transformative power of Mary is in the suffering she models and guides us through, kneading our ego like the true bread that will then rise and be transformed.  Kali Ma has three complete sides to her qualities :  goodness, passion and darkness.  She is both motherly and sexual;  both transformative and sensual.

As the Flame descends through Grace, or holy baptism or shaktipat, it snakes through the body and it purifies the self.  Until the Self has mastered the fear of the self, the Flame may be experienced and perceived as an enemy of the self.  The self will defend against its own dissolution.  Therefore, it is necessary and required that the initiate undertakes a sadhana (spiritual practice) that will reveal the nature of the Self, both dark and light.  Self-knowledge is the key. 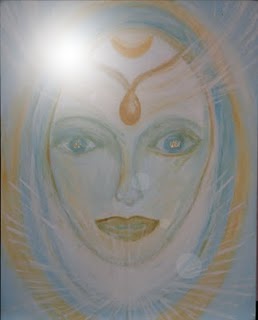 The Flame is the Grace and the Light.

Arut Perum Jothi
Arut Perum Jothi
Thani Perum Karunai
Vast Grace Light
Vast Grace Light
Infinite Divine Compassion –  Verses 1 and 2 from the Jothi Agaval by Swami Ramalinga, Siddha Saint.
Swami Ramalinga, the Siddha, who merged with Jothi, teaches that the Vast Grace Light is both Divine Father and Mother. The Jothi unfolds like a rose in the cup (skull) and fills the head with bliss.
‘Through self-knowledge you have come to understand that your greatest obstacles become your best allies. You will use all of that which you struggled with, as tools to carry the message of the Grace Light.’ Swami Ramalinga
Liked it? Take a second to support Hettienne Grobler on Patreon!

The Mysteries of the Black Madonna and Mary decks

A day of intense energies which we are experiencin

A blessed feast day of Madonna delle Neve of Torre

The Mothers speak clearly through the art and hear

During July portals have been opening and our psyc

Mother of the Eucharist; I am the bread. I am the