Love is the Heart of the Matter 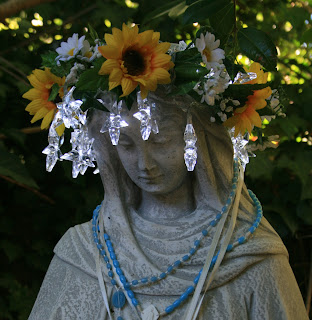 The word LOVE has so many meanings, so many connotations.  In Greek there are eight different words for love, but in English we are impoverished as we have only one word.  Love means forgiveness, unconditional love, letting go, surrender, divine love and acceptance.

This material world is a world of matter (mater/mother) which is being projected from our inner psyche or Spirit (father in heaven – higher mind).  At all times we are both Observer (Higher Mind/Father God), the One being Observed (spirit in matter or Mother) and the Observer.  In Sacred Geometry this is depicted as the Vesica Piscis.  The process in which the One plus One merges and forms the third, the Vesica Pisces. 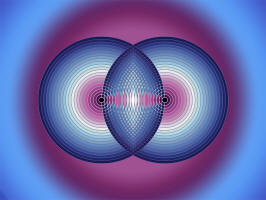 This third shape can be recognized as the shape of amongst other things, the fish, (the word means the bladder of fish in Latin) (and it is also referred to as the Mandorla), the universal symbol of the Age of Pisces and also Jesus, the Christ.
In these image of Isis and Horus and Mary and Jesus, the three are present.  The father is not visible, but is present by implication, and the Mother and Christ is present.

This is indeed the image of the Self-begotten human being who evolves into Love and the loving action of forgiveness and compassion for self and others.  It is also the third, the principle of Unity Consciousness and Advaita or that which is not limited by the duality of the two, nor polarises into either Spirit or Matter, but that which unites and thereby creates a third principle, Love and only Love;  Or in the yogic-tantric traditions of India : facets of a single, non-dual awareness-self. In kundalini yogic terms it is the union of Will (Shakty-kundalini) with Knowledge (Prana-kundalini) giving birth to Action (Para-kundalini).

Here is a lovely extract from the website :  www.blueprint4creation.com that explains the image of the Vesica Pisces and the Holy Trinity very eloquently in terms of Sacred Geometry.

As you can see, when 2 join, a 3rd space is created, but what is miraculous about this form is that it creates the mathematical foundations, or ratios, for the geometry of light, manifestation and procreation, otherwise known as the square roots of 3, 2 and 5 respectively.
The two circles represent two polar opposites, and in this sense, one circle defines the female or receptive aspect of consciousness while the other circle symbolises the male or expressive aspect of consciousness. The Vesica Piscis is the space that joins the 2 to birth the 3rd, the joining of female and male energy to create a new form. And within this oval form between the two circles, is found the mathematical ratio that creates the synergy of magnetic (female) and electrical energy (male) that actually creates the electromagnetic spectrum, or LIGHT itself. Is it any wonder then, that the Vesica Piscis is exactly the shape of the EYE? After all, it is the window through which we can view light and the reflection of creation.
This is the image of reflection. It is also the image of the creator, “God”, and it is said we are created in that image. The word man, although apparently genderised, comes from the Sanskrit word, Mannas which translates as “the consciousness that can reflect upon itself”. We need light to see, feel, hear a reflection. Numerology expresses the vibratory power of words and language, and fascinatingly, the word LIGHT adds up to 11!
So with 11 we have the joining of two 1’s that leads us to 2. 1 is a circle, and when we join two circles, we have the image of light, and actually create the vibration of 3, or the trinity. The holiness about the trinity is that when this step of unfoldment is reached, there is no going back, the creative force has been unleashed and set in motion,the geometric blueprints have been identified and the birth of creation has begun. And this translates to us directly and physically as well; at the point of conception, the male and female cells join and pass through the image of the Vesica Piscis to begin the process of cell division.
The revelation of the Holy Trinity is what lies behind the mysticism of the 3. All creation stories across the religious and scientific divides, begin with the source of ALL-THAT-IS existing as a point (or a circle) beyond time and space within a void where nothing else exists, not even light. Then, creation begins by consciousness’ desire to know itself experientially. This desire-awareness created a movement, a vibrational thought-form that divided the God self into 2. To know itself, it had to see itself for what is, and to see is to gaze upon a REFLECTION of itself. Reflection is the mirroring of light, and this is what is depicted in the geometry of the Vesica Piscis, the holographic mirroring of reality. 11 represents the creation and reflection of Light, and reveals to us what we are, light-beings who are reflections of the creator looking back upon itself throughout the whole of creation.

So back to the daily here and now.  The first step towards accessing the Sacred Heart of the Universe, where all is One and beyond the duality of good and bad, is sacred awareness.  The second step is acceptance.  (If you would like to learn more about these concepts, please read my other articles on this blog and also on http://shaman-shewhoknows.blogspot.com on awareness and acceptance and also Alchemy of the Heart).

And implicit in Acceptance is Forgiveness.  And before one can contemplate the possibility of becoming one with all that is and accept that everything is divine and love and only love, one needs to become forgiveness or prema (in Hindu terminology).

Forgiveness is such a loaded word – it evokes great resistance, especially in us who have lived in a patriarchal society.  Forgiveness evokes memories of being told that you are born in sin and that you have to beseech the Patriarchal Father for eternal forgiveness.

And this is what we often see in many of the images and statues of Mary.  But Mary is indeed the triple Mary.  She is Mary the Mother, Mary Magdalene, lover and consort and Mary-Sophia, wisdom  and in all three of the Triple Mary or the Triple Goddess are implicit and present the Holy Trinity.

This morning, Mary, Blessed Woman, has a message for us.  She says that Forgiveness is the Heart of the Matter. And understanding that forgiveness has been labeled and conceptualised by our wonderful intellect, She sets out explaining what She means by ‘forgiveness’.

Many are the stories that you live and share.  At the heart of these stories are always the feelings;  the feelings of the heart.  These may be sadness, anger, joy, happiness and suffering.  Suffering are the most difficult part of the story to alchemize in the sacred heart. Often the pain is so intense and so all-encompassing that the heart closes down and the mind does not want to open the doors to the oven.  But in order to ‘eat’ or ingest the suffering and the pain in your story, one has to cook it first before it is edible or maybe even tasty!

And there is only one way and that is through forgiveness.  When I use the word forgiveness I see that it immediately evokes the picture of a penitent self, born in sin, crawling on knees to ask the archetypal father’s forgiveness – for something that you do not believe that you deserved to feel, or that your actions could possibly have evoked such cruel selfishness and heartlessness from another?

But that is not true forgiveness.  True forgiveness will descend like a dove from the heaven and enter your heart and it will be as though none of that suffering ever happened.  But how to get there?  Through the triple goddess of hope, faith and charity.

Through the simple act of finding hope : in the beautiful colour of a flower;  in the image of the rainbow;  in the smile of another.

The simple act of faith :  you do not need to understand concepts or intellectual thinking or which path is the right path.  Faith like a child will inherit the heavens.  Faith that you are created in Love;  you are a reflection of Love on this earth and that your very being is Love.

And charity to yourself, first and foremost.  Charitable thoughts to yourself and your own struggles and resistances and efforts to love.  Learn to love yourself;  accept yourself as you are right now, in this very moment.  Accept that your imperfections are part of the perfect design and that by implication, you are perfect in love.

Then, smile inwardly or outwardly, put down all the feelings of heavy heartedness and step out, trusting that peace will find you and forgiveness will settle in your heart.  Forgiveness for all that still lies behind the veil of the human mind.

And do something kind and loving for yourself today.  Give yourself what you need today.  The rest will follow.

0 thoughts on “Love is the Heart of the Matter”