Blessings to you.
On this, the eleventh day of Thirty Days with Mary,
we practise the Immaculate Practise and you
have the freedom to pray any of the prayers shared with you,
practise either the Meeting with Mary meditation,
or do the Sacred Heart diksha once more to strengthen
the spiritual energies before you start with the
Sacred Heart Meditation on Day Twelve.
We are currently in the second week and the focus
is on the Suit of Holyrood (wands) and
the archetype of the Sacred Heart, the Magdalen
and the Mystical Marriage.
VI  TREE OF CHOICES
Traditionally The Lovers
‘God planted trees in a garden. Humans lived among those trees, they were not yet divided when they were told: Eat from this tree or do not eat from it.’ Logion 94, The Gospel of Philip
The tree plays an important role in the Mysteries.  In this card we are
confronted with the Tree of Choices.  In the Biblical and Judaic stories
there are different versions of the trees of Paradise.  It would seem that
there was in truth only one tree, the Tree of Life.  This is an ancient symbol
of the self-sustaining and regenerating power of a spirit filled world.
In the story, this tree was later split into two, the Tree of Life and the
Tree of the Knowledge of Good and Evil. After the split of the trees
we see that they are now in opposition to each other. After the fall of
Adam and Eve, caused by their eating from the fruit of the
tree of Knowledge, humanity was cut off and banned
from the Tree of Life.  The Tree of Life promised eternal life
and humanity was now doomed to a mortal and exiled life, beyond the veil.
In this shrine I compare the metaphor of the two trees with the way in
which our culture have split value and worthiness of
masculine and feminine and then still further
dividing the feminine into the ‘good girl/virgin/wife/mother
and the bad girl/lover/wise woman.
This split is reflected in the way that the stories of Mariam of Nazareth
and Miriam of Magdala, is interpreted and
held up as image of the two aspects of woman .
Popular legend has assigned the apple tree to the
Tree of the Knowledge of Good and Evil.  The apple is a powerful
symbol of woman and her feminine sexual nature.
In this version of the story of the Fall of Man, woman and
her sexual nature is held responsible for their
eviction from Paradise.  So right at the onset a woman
has been forbidden from getting to know
and understand her complex sexual nature.
There is an inherent sexuality in physical bodies;
one could say that the soul radiates its mystical and
sexual nature through its physical cloak.
But humanity has been severed from this mystery and all its gifts.
In the Christian story we are only told the story of
Mary the Virgin-Mother, the one who conceived immaculately
and who remained a virgin even after the birth of her son.
We never really meet Mary the Beloved of Jesus,
the Bride of the Bridal Chamber, the one who is called the Magdalene.

Mary the Mother of God is indeed a Bride
without a Bridegroom as She is the Bride of the Spirit,
but there is another sacrament in the mysteries,
that of the Bride and the Beloved Bridegroom..
This brings us to Mary Magdalene and the various interpretations
of her role in the story of Jesus and the three Marys.
Few accept Mary Magdalene as the beloved or the
bride of Jesus the Bridegroom.
Mary Magdalene has been blackened in reputation by
various authors of religion through the centuries
and mostly she has only been seen as an unholy woman
who indulges in pleasures of the flesh.
Religion has always separated the life of the flesh
and the life of the spirit and especially in the treatment of
women as wives, lovers and mistresses.
And we see this split right at the start of the story with the
two trees in the Garden of Paradise. 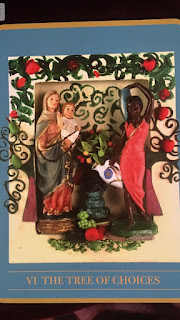 In this card we see Mary the Mother with the rosary in her hands and we see the black Mary as she is depicted in the poem ‘The Thunder, Perfect Mind’ in the Nag Hammadi library.  In this shrine she represents Mary Magdalene and ultimately both together represent the Feminine Soul and aspect of the eternal feminine.  Both these women carry the name Mary and to me it is an important indicator that there is an important hidden message for those with ears to hear.  The split between the Madonna and the whore is active in many layers of our cultures.
Women are demonised for the expression of their sexuality,
whereas men are honoured and revered for their sexual prowess.
In the traditional Lovers card we often see a male hero struggling
for a choice between two women.  In the Mysteries card we have the
female version of the choices card.
Women are mostly compared to men and masculine pursuits and rarely in relation to other women and themselves.  This creates an imbalance in women and a suppression of womanly ways and feminine relational values.
Hecate, goddess of choices, is often shown with three roads behind her.  One plus one equals three: new life is born from struggling and discord. Living with the tension of the opposites, allowing disagreement and another’s voice that differ from yours, to be heard, brings awareness to the glassy mind, of the awesome beauty of creating a life that has meaning. There is a place where all the rivers converge and that place is the Sacred Heart of humanity.
Through the union of the opposites, that is, through the marriage of two opposing forces, a third force is born.  This is the meaning of creativity and the magical nature of the number three.  (This card is a six and thus contains two threes). On the path of divine love, the magical child of love and hope is born from the marriage of the opposites.
The braid of life contains three strands which can be symbolised by the colours white, red and black.  In the ancient cultures the hawthorn tree was regarded as a sacred tree. Today the hawthorn tree is sacred to Mary and the goddess as well. This specific tree contains all three elements of the thread of life and even more importantly, they overlap. The white blossoms start to form whilst the red berries and black seeds are still hanging on the thickly leaved branches.
The white is regarded as the ‘virgin’, the cycle of spring and new beginnings; the red berries represent summer and the fullness of the season and the physical acts of sensuality and joy and loving and the black seed contains the potential of fathering the new life and it also is the end of the life of the berry.
As we dance and weave with the tension of desire and repulsion between the opposites of life, we discover new possibilities, new experiences and we weave a new story.
This shrine and card represent choices. The Tree of Choices invites you to consider the choice to say ‘both’ instead of the black and white rationale of ‘either/or’.  You will be given the opportunity to make a decision and you are reminded that it is possible to find a new way and a different way of reacting and of doing things.  You are reminded that it is only fear that will force you into a corner, and thereby denying half the picture.  When you are willing to keep an open mind and an open heart, it is possible for a new vision to be born.
blessings
Hettienne
Liked it? Take a second to support Hettienne Grobler on Patreon!