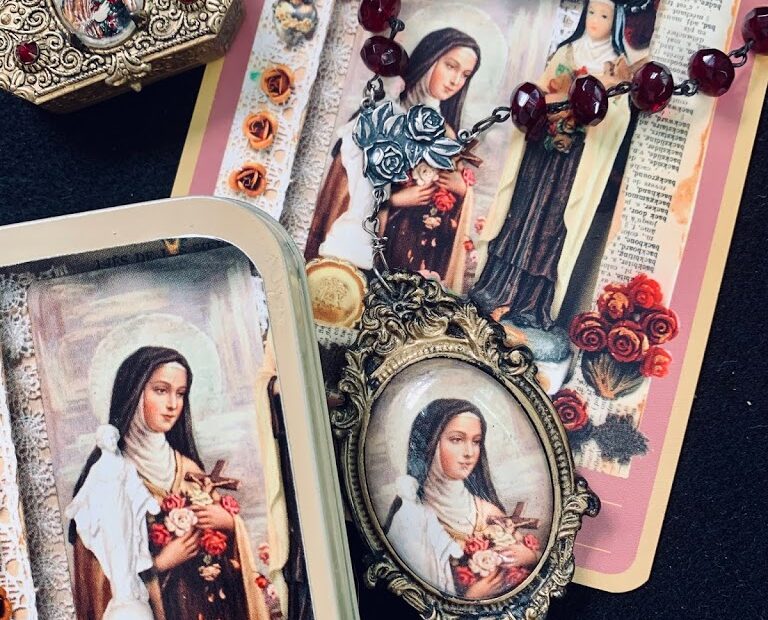 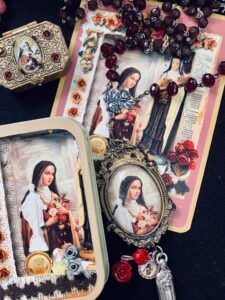 The story of St Therese of Lisieux is told in the Five of Roses
in the deck.  She is referred to as The Little Flower or
the Woman that was born to love. She is known for ‘the Little Way’
in which she advocated the ordinariness of everyday tasks
to be seen as a way of bringing the sacred to life.
Her story of the smiling Madonna and her miraculous cure
is in the Mysteries of Mary deck 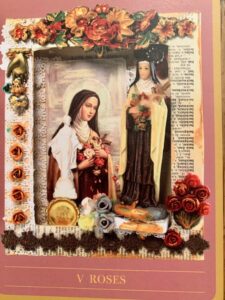 The statue that smiled at her during her illness is standing in the
Basilica in Lisieux where it was moved from her childhood home.
If a little flower could speak, it seems to me that it would tell us quite simply all that God has done for it, without hiding any of its gifts. It would not, under the pretext of humility, say that it was not pretty, or that it had not a sweet scent, that the sun had withered its petals,or the storm bruised its stem, if it knew that such were not the case. – St Therese 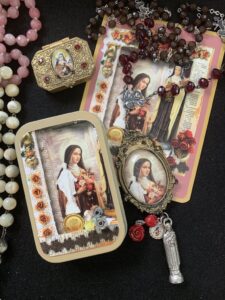 One of the very first shrines I made was of her.
St Therese called me over many years
and eventually I made the trip to Lisieux, about 90 minutes’ train ride
from Paris.
Lisieux is a beautiful French city with an old world  charm.
And the bakery near the train station makes the most
wonderful French pastries, should you ever visit.
The beautiful Basilica dominates the view down the street
leading up to it.
To my surprise I discovered the life-story of a free-spirited
young woman who possessed
a deep insight and clarity into the Truth of faith and love.
Her life spoke of many miracles, including
the Smiling Madonna. 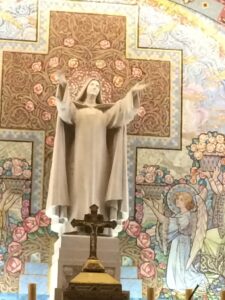 In the Basilica was a magnificent and unusual statue
of Jesus – a dancing Jesus on the Cross!!
I did not take any photographs as it was forbidden
in the main part of the Basilica and I have not been able
to find a copy of it anywhere on the Internet.
But I will never forget this amazing image :
it spoke clearly of St Therese’s philosophy and understanding
of the true sacrifice and the intersection of heaven and time.
The Basilica was built after St Therese’s death and
I did not find any real sense of her presence there.
But then we walked down to the old part of town
to where she lived and grew up as a child and also
to her convent and its rose gardens and the small chapel
of the Carmelite Sisters where the remains of the saint lies.
And here we were all deeply touched by a sweet, loving
and fragrant presence.  A very sweet honey-like fragrance met
us long before we arrived at the garden.  I smelled this same
fragrance at the sanctuary of Our Lady of Lourdes. 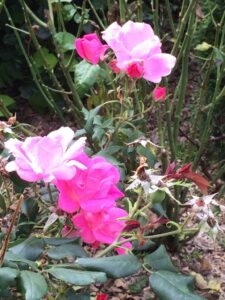 We picked some of the roses and offered them to
St Therese. 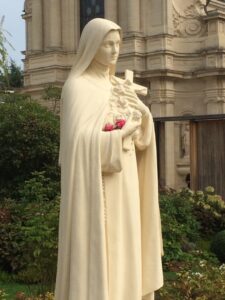 The energy in the chapel where her remains lie, were
intense.  One cannot describe that which we do not
have the vocabulary for.  But I received a very clear
and distinct message sitting there which resonated
deeply with my heart and on my return home
I started implementing this message into my life.
Having been in her energy or presence, has had a deep impact
on me and the way that I perceive the world.
She has and still continues to strengthen my belief in the
power and Grace of the innocent and purity of heart.
Even when the world shakes its head in disbelief and
disapproval, St Therese’s child like faith and inspiration
lives on and radiates like a fragrant rose its beautiful scent
into our hearts and minds.
There is no artist who does not like his work praised, and the Divine Artist of souls is pleased when we do not stop at the exterior, but penetrating even to the inmost sanctuary which He has chosen for His dwelling, we admire its beauty. – St Therese d’Lisieux
blessings on this week of roses
Hettienne
Liked it? Take a second to support Hettienne Grobler on Patreon!