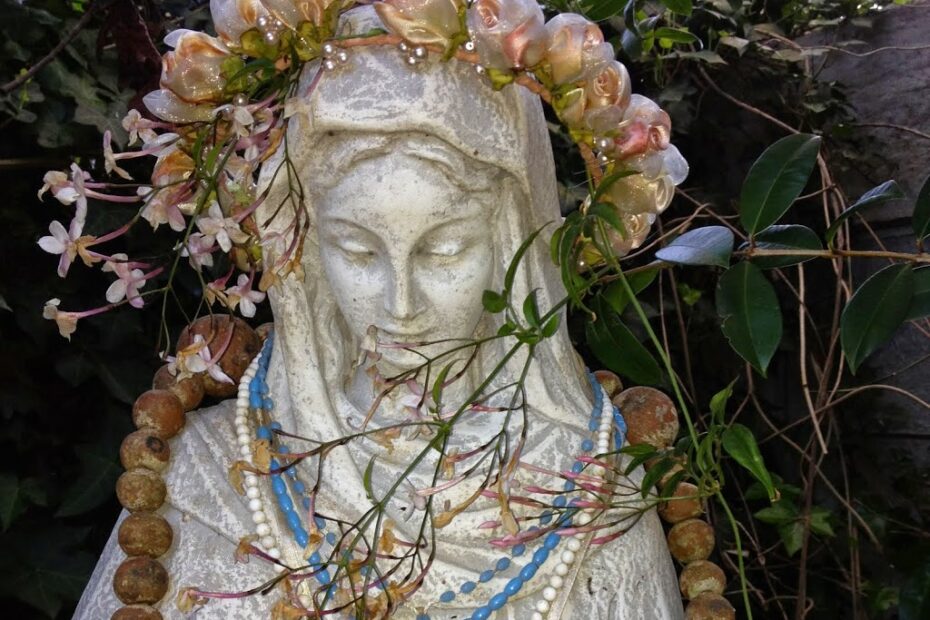 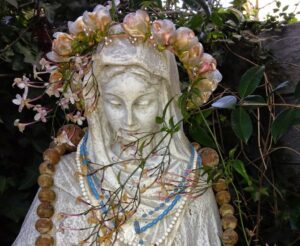 Shrine in my garden

Welcome to day of Walking with Mary.
We are in the fourth and final week and we are focusing
on the Suit of Roses and amongst other aspects,
we focus on incarnation, manifestation and embodiment.

Today I would like to inspire you with Marian pilgrimages
in South Africa where I live.

in the Alps of France, I had a very powerful experience.
My direct personal experience of the sacred Presence
of the Lady, irrevocably changed my understanding of life and set me on a new path.
I returned and felt compelled to devote all my work and actions to Her.
I created a sacred Mary Garden   Under Her guidance I founded
the Temple of Mary and She imparted the two year initiation program to me.
I felt called to create shrines in the ancient sacred altar tradition and this led
me to creating the Mysteries of Mary Tarot Deck.
Since then I have made four more pilgrimages to the grotto of Lourdes.
Years ago I had heard about the apparitions of Our Lady of Ngome.
I did add it to my bucket list and then it sorted moved to the background
of life.  I started having dreams of Lourdes and I felt a deep compulsion
to visit the Lady and her sacred waters.
At the time of the dreams I started doing research on Ngome
only to discover that it is called the Lourdes of Africa!
Ngome is an ancient sacred site where seven streams meet to form a
spring of which the water has healing properties.  Previously this site
was sacred to the indigenous Zulu population and it was used for healing and
baptism.

Mary as Lady of Ngome

had appeared ten times to a local Benedictine nun and the image of the Lady
of Ngome, Tabernacle of the Most High, cured many miraculously.
The apparitions were kept secret for years after the death of Sr Reinolde –
but I will share the full story in my next post.
Once I had read up on Ngome I decided that I am being called
to visit Our Lady of Ngome and immerse myself in Her sacred waters
and energy.  Three of us decided to go on a pilgrimage to Ngome in
the new year.  We did not have any specific dates in mind and decided
to buy the best airfare tickets available which happened to be
9 to 14 February.  Only when I made the booking for the guesthouse
near Ngome did I realise the incredible synchronicity : we had planned
to spend the Saturday in Ngome.  As it turned out it was
Saturday 11 February, the feast day of Our Lady of Lourdes!!
We took a local flight to Durban, spend the day and two nights, then drove five
hours to Ngome – a story on its own as we dodged cows, goats
and potholes.  As part of our pilgrimage we visited the Lady of Lourdes
shrines at Marianhill Monastery near Durban.  The monastery is
outside Durban in the green rolling hills of Natal. 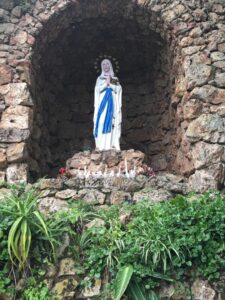 As we climbed the steps toward the shrine we were enveloped
in the most intense fragrance of thick sweet honey.  At first we did
not really pay attention as we were in the tropical and lush
Natal gardens and we had seen many tropical flowering trees
everywhere.  After a few minutes, as the pungent fragrance
persisted, unmoving, unlike the fragrance of flowers carried
on the wind, we all came to a standstill and exclaimed
‘what is that smell?’.  We all had previously been to Lourdes
and Lisieux (the shrine of St Terese) where we had experienced
the incredible honey-rose fragrance.  However, there we were
surrounded by roses and a rose garden, although we all did agree
that we had never smelled roses with such a potent fragrance!
We lit some candles and spent some time at the shrine and as we
descended the stairs, we could not resist the temptation to look for
the source of the fragrance.  There were no flowers nearby, only
creepers and ferns and trees. We walked up and down and the
fragrance did not move, nor become any fainter.
We realised that we were once again immersed in the
honeyed fragrance of Our Lady of Lourdes.
This is a very real phenomenon found at places where the Lady
has either appeared or where She is revered.  It also appears
during healing sessions with the healing energy and Presence
of Our Lady or during times of deep meditation and bliss.
At Ngome in Kwa-Zulu Natal in South Africa
is the Marian site of miraculous healing.  The number of
healings at this river and sacred wells
are often compared to Lourdes
and it is indeed called the African Lourdes. 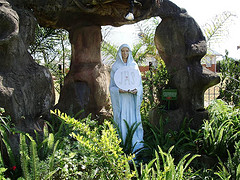 Our Lady of Ngome, KwaZulu-Natal, South Africa
Mary appeared as a Living Monstrance and asked to be called the “Tabernacle of the Most High”.
The Blessed Virgin stated that she wished a shrine to be built in a place where the seven streams come together—pointing to an empty area.
Sr Reinolda identified the springs two years later at Ngome, and the shrine was erected.
Sister Reinolda had ten ‘encounters’ with Mary during her lifetime
as a nun at the Catholic missionary at Ngome.
The first encounter took place on 22 August 1955 during the
Feast of The Immaculate Heart of Mary.
this is an extract from Sr Reinolda’s journal :
Shortly after Holy Communion, Mary stood before me, very close-by. Everything was seen in spirit. I was drawn into another atmosphere. Mary showed Herself in a wonderful light more beautiful than the sun. She was robed all in white, flowing veil from top to toe. Upon Her Breast rested a big host surrounded by a brilliant corona radiating life. She was a living Monstrance.
Mary stood upon the globe, hands and feet invisible. I felt like entering a cloud, drawn by Mary, away from the earth. I had my eyes closed but I saw so much light that, for several days, I was very much dazzled by the beauty and light that I had seen.
Mary said the following:
“Call Me ‘Tabernacle of The Most High’.
You too are such a Tabernacle, believe it.
On YouTube there is a video called the Dancing Sun. It was taken
by pilgrims who visited Ngome.
Here is the link – https://youtu.be/rsXubOo20Yw
At the inauguration of the Chapel of Lady of Ngome thousands of people
witnessed another miracle of the dancing sun.  The sun rolled and moved
in the sky and in the words of witnesses ‘shot a ray of sunlight onto the statue
of the Lady of Ngome’.

Another YouTube video on Ngome
https://youtu.be/8Yvklf231kY
The appearance of the Lady in White at Lourdes and at Ngome
and the miracles that she brought to the world, has the ability to
transform your world.
Magnificent Mary may I remain open
to the impossible
May I remember not to ignore the very subtle
messages of Spirit;
and may I undertake each task as the sacred task that it is
Ave Maria