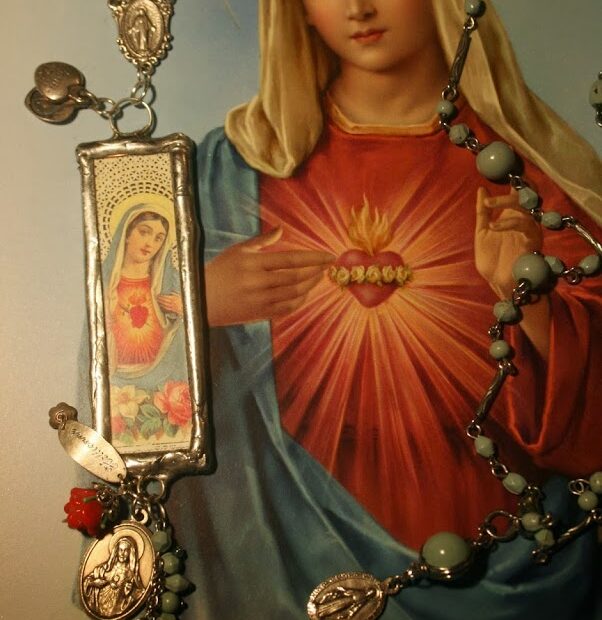 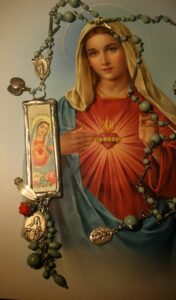 For me the rosary is a holy object that connects me to my origin, and the
origin of all creation.  We spring from God’s womb, the Mother-Womb
of the Holy One.  The rosary, in Western spirituality, is what has
survived of our devotion to the motherhood of God.
It is the mother-prayer – Christin Lore Webber 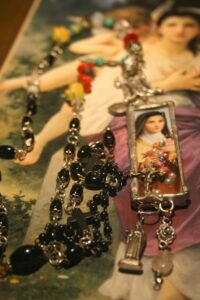 At Lourdes the beautiful lady asked that a chapel be built for her.
This was done in 1876, but the basilica soon became too small for the many
pilgrims that arrived to visit Lourdes.  And the Rosary Basilica was built :
Basilique Notre-Dame du Rosaire
When Our Lady appeared to Bernadette she was holding a rosary
in her hand.  The Basilica of the Rosary is dedicated to the rosary
in its architecture and magnificent chapels, mosaics, shrines and paintings.
The three arches depict the joyful, sorrowful and glorious mysteries.
Around the central dome, the transepts and the sanctuary contain
15 Chapel of the Mysteries each one decorated with mosaics depicting
the 15 mysteries of the rosary. 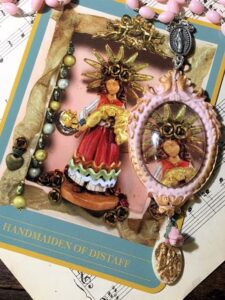 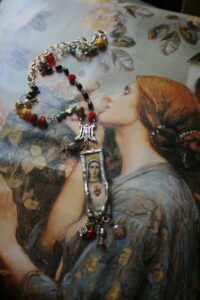 The rosary was given to Bernadette and mankind by Mary, the
Queen of Roses, or the Rose Queen.  One can imagine that by repeating
the rosary, one hands Mary a rose and thus create a garland of roses for her. 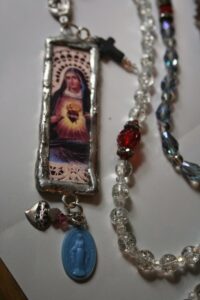 The feminine form of God has been called by many names that
is directly related to the word rosary – or maybe the rosary is derived
from the many names of the Heavenly Rose.
Through the ages the goddesses Isis, Venus, Aphrodite and the Shekinah,
had been called Great Rose, the Rose Queen, Flower of Venus, the Rose Garden
the Cosmic Rose and the Mystical Rose.
The early Christians used the Psalms as a ‘rosary’.  Often they were
divided into three parts, each containing fifty Psalms.  Early
hermit monks describe these three designations by knotted ropes which they wore
tied around their waist.  With a certain number of prayers came to be ascribed
to Mary, they were termed Our Lady’s Psalm. 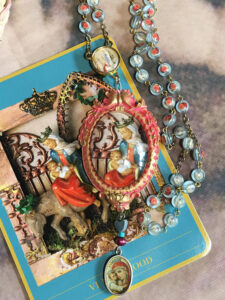 The rosary is a universal form of prayer and present most religions.
In the Bhagavad Gita chapter 7, it is said that the Universe is a necklace and the string is the
Atman or the Higher Self that holds all things together.
The prayer on each bead corresponds to breaths. This Hindu rosary is sacred to Sarasvati, Goddess of language. The goddess hears the words of the prayers and is the Word.
The Buddhist rosary has 108 beads. This is 12 times 9 to represent the cycles of the universe.
The Muslim rosary has 33 beads for the 99 names of God. In all instances, the rosary is a prayer wheel and a living mandala, a symbol of wholeness. 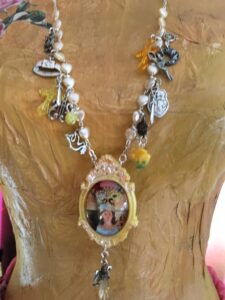 In the same way that our prayers string together a garland of roses, so do our

every thought and our every action.  What we say and do contribute to the
Sacred Garden, both within and without.  When we sow and nurture with love
and empathy, then we harvest and reap with love and empathy and all
those that live on Mother Earth, human and creature, will benefit.
Such is the way of the Mother – her cloak covers all. 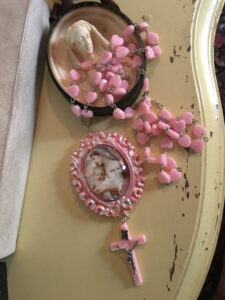 blessings to you
Hettienne
Liked it? Take a second to support Hettienne Grobler on Patreon!