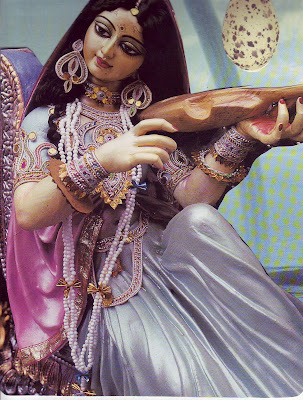 Lakshmi’s gilded basket spills over with wealth
But it is Saraswati’s humble mat on which sits wisdom.
Bengali Proverb
Saraswati is the Goddess of learning, knowledge, and wisdom. Her name derives from the Sanskrit words  sara meaning “essence” and swa meaning “self.” She is the wife of Brahma, the creator of the universe. Saraswati is worshipped by students, teachers, schoolchildren, scientists, academics and anyone interested in learning. 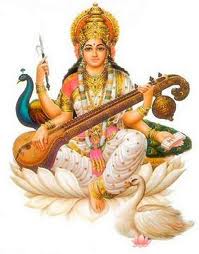 She has many titles including Goddess of Speech, Dwelling in the Front of the Tongue, She who Dwells on the Tongues of Poets, the Power of Memory, and She who is Intelligence.
She is usually depicted wearing a white sari, representing purity, sitting on a white lotus which symbolises supreme knowledge. Sometimes she is shown with four arms, and sometimes with two. Her rear left hand holds a book, which betokens that knowledge should be used to better humankind. Her rear right hands holds a rosary, which signifies that knowledge must be based in spiritual truth and not the ego, since knowledge dominated by ego can be destructive. She is accompanied by a swan, a symbol of transcendence and perfection. Saraswati is shown playing a veena, a type of lute, which denotes that the seeker after learning must learn to live in harmony with the world.
One aspect of Saraswati is the early goddess Vac [‘Speech’] who played a major part in creation: the god Prajapati’s mind produced Vac, who then wished to multiply and extend herself. It is said that the world was created through sound; the syllable Om is said to contain the whole process of creation.
In later myth, Saraswati also played a part in creation as the god Brahma divided his body into two parts, male and female. The female half was Sarasvati. She and Brahma mated and produced Manu who went on to make the world.
In a similar legend Krishna divided himself into male and female, purusa and prakriti [spirit and matter]. The female half had five shaktis or dynamic powers; Sarasvati was the shakti whose task was to provide insight, knowledge and learning. 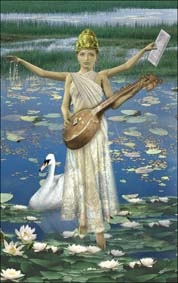 Her feast day is celebrated in early spring, in January or February. on this day, pictures and statues of her are displayed in schools and universities and books, pens and musical instruments are blessed. It is considered auspicious if children speak their first words on this day.
Sarasvati is the inspiration behind all learning, culture, science and the arts, music and dance. She gave the gift of writing to humankind so that her songs could be written down and preserved. She is also the goddess of the spoken word, and eloquence, and words are said to pour from her like a sweetly flowing river’.
She is not a domestic goddess, and would rather give birth to works of art and learning than children, her essence is entirely spiritual, unlike most of the other Hindu goddesses, who are concerned with fertility and motherhood.
Saraswati is the goddess of learning and acquired knowledge, rather than innate knowledge, whether in the arts, sciences, or spiritual thought. She is the patroness of students and academics, as well as musicians, poets and dancers. As the patron of rhetoricians and writers, she aids in the flow of words and eloquence.Saraswati is invoked to overcome the frailties of mind and poor memory. Above all, she is entreated to bestow the power of conveying knowledge to one’s students. It is said that she is a jealous rival of Lakshmi, the goddess of wealth, and that pursuing wealth alone will assure that Sarasvati’s gifts will desert you.
This beautiful piece was written by Anna Franklin. With thanks to :
http://www.merciangathering.com/saraswati.htm
Liked it? Take a second to support Hettienne Grobler on Patreon!